We just submitted the camera-ready version for a short paper on building kernels in Rust that will appear in APSys 2017 (Asia Pacific Workshop on Systems) next month. We’re really excited about to be able to share this paper because it clarifies some important misconceptions about our evaluation of Rust from our previous work.

Come to our training session at RustConf this month! We will show you how to build and run Tock on real hardware, and how to write kernel extensions and applications in Rust!

Specifically, a workshop paper we published nearly two years ago, title “Ownership is Theft”, has been discussed extensively in the Rust community. It reported on challenges we ran into early on building Tock in Rust and, maybe as a result, many took it as a warning against using Rust for kernel development. It may also have been the result of the incendiary title. No regrets!1

We’ve since understood how to work around those issues, in large part thanks to help from the Rust community. This let us continue making significant progress on Tock, including the beginnings of a deployment this month of the Signpost city-scale sensor network, which runs Tock.

One of Tock’s main design goals is to bring extremely fine-grained isolation to low-power (think <100uA on average), low-memory (think <64kB of RAM) systems. For example, Tock lets embedded programmers mix their own code and library code from hardware vendors or the open source community without having to completely trust every line of code. Do you have an accelerometer and encryption module sitting on the same communication bus? Want to make sure the fancy step counter library you’re using doesn’t have access to your encryption keys? Tock can help with that!

So what’s the problem?

Well, most operating systems assume that all kernel code is trusted. In part, this is because they rely on hardware enforced memory protection, and the process abstraction in particular, to provide isolation.

Unfortunately, the process is a heavy-weight abstraction: each process has at least a stack and some kernel data structures. and switching between virtual address spaces is costly. So, hardware enforced memory protection doesn’t “scale down”2.

There have also been a number of research systems that attempted to replace hardware enforced isolation with language enforced isolation. Most notably, Spin used Modula-3 to allow applications to extend the kernel and Singularity used Sing# (a variant of C#) to replace hardware enforcement completely with type-safety (notably, the entire system runs in privileged hardware mode). But all of these systems have used garbage-collected languages. There are various issues with garbage collection in the kernel, but most importantly, it generally a relatively large and complicated runtime that must be completely trusted.

When we started working on Tock, we realized that Rust provided an incredibly promising opportunity. Rust is the first “mainstream”3 language to enforce type-safety strictly without relying on runtime memory management, by using affine types (more on that later). Moreover, Rust’s compilation model is basically identical to C, so it’s relatively easy to control things like memory layout. This meant that it’s possible to build a kernel that allows extremely fine-grained isolation at almost no cost and including only a minimal trusted computing base (TCB).

One of the key things we missed when we wrote “Ownership is Theft” is that preventing mutable alisases is not just about concurrency, but also imperative for preserving type-safety. For example, consider Rust’s enum types which allow multiple distinct types to share the same memory, similar to unions in C. In this example, the enum can be either a 32-bit unsigned number, or a mutable reference (pointer) to a 32-bit unsigned number:

But unlike unions in C, a Rust enum is type safe. The language ensures that it is impossible to access a NumOrPointer as a Num when the compiler thinks it is a Pointer, and vice-versa.

But operating system kernels depend heavily on callbacks and other event-driven programming mechanisms. Often, multiple components must both be able to mutate a shared data structure. Consider, for example, the random number generator software stack as shown in the figure below. RNG provides an abstraction of an underlying hardware random number generator, such as Intel’s RDRAND/RDSEED or a TRNG on an ARM processor. 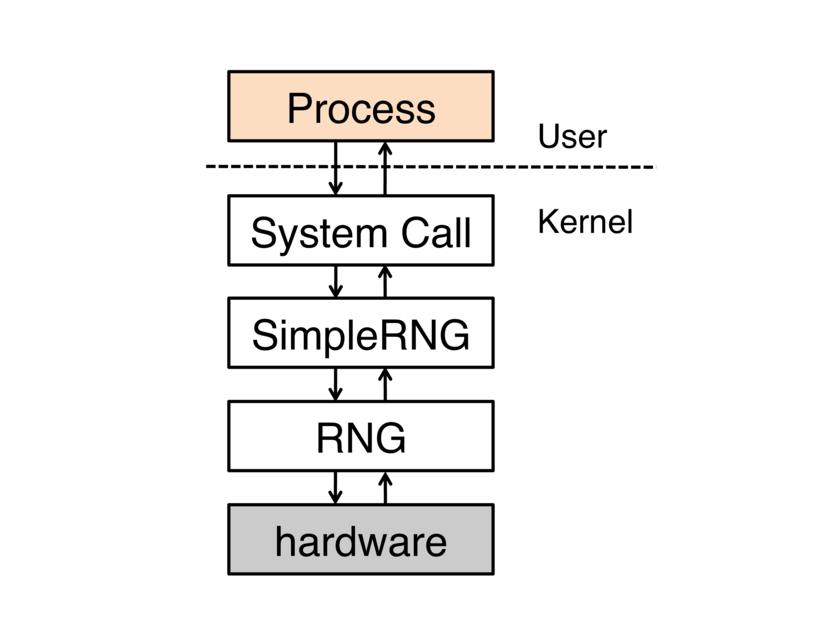 Rust’s ownership model does not allow both structures to have a mutable reference to SimpleRng (the reference must be mutable because command marks SimpleRNG as busy, and deliver_rand marks it as not busy, mutating the internal state of the SimpleRNG object).

It turns out there are certain instances where it’s perfectly safe to have to allow mutability non-unique references. In fact, in most cases in a kernel, we don’t directly share constructs like enum. Rust has a notion of container types that have what’s called “interior mutability”. Interior mutability is basically the ability to bypass the single-mutable-reference rule, in a controlled manner4.

The Rust core and standard libraries have a number of types like this: Cell, RefCell and Mutex, to name a few. In all of these cases, users can use shared references (&) to mutate the value. These container types are safe because they either copy values in and out entirely (Cell) or enforce some for of mutual exclusion (RefCell and Mutex).

In Tock we use these ubiquitously. Except in rare cases, all of our components use shared references to self and each other, and pushing all mutability to the “leaves” of data structures. For example, the SimpleRng example above, which had a simple boolean field marking if it’s currently busy, would actually looks like this:

Both the RNG and the system call dispatcher hold a shared reference to the same SimpleRng. Normally, this would mean that calls from either would not be able to modify SimpleRNG’s internal state. However, Cell allows the command method to set busy to be true even though &self is a shared reference.

Using this architecture, it is possible to achieve a minimal trusted computing base (TCB) without sacrificing performance or memory. In Tock, the TCB includes about 1000 lines out of 6000 lines of our own code, in addition to the Rust core library (and really only a small subset of it that we actually use).

Moreover, we’ve managed to use the type system to enforce isolation at granularities that are not possible with hardware isolation alone. See the paper for some examples that show, e.g., how we give untrusted components direct access to DMA hardware registers but still enforce that they cannot access arbitrary memory.

Does this make you want to build embedded systems using Rust and Tock? Come to our training session at RustConf this month!