Most operating systems provide isolation between components using a process-like abstraction: each component is given its own slice of the system memory (for its stack, heap, data) that is not accessible by other components. Processes are great because they provide a convenient abstraction for both isolation and concurrency. However, on resource-limited systems, like microcontrollers with much less than 1MB of memory, this approach leads to a trade-off between isolation granularity and resource consumption.

Tock’s architecture resolves this trade-off by using a language sandbox to isolated components and a cooperative scheduling model for concurrency in the kernel. As a result, isolation is (more or less) free in terms of resource consumption at the expense of preemptive scheduling (so a malicious component could block the system by, e.g., spinning in an infinite loop).

To first order, all component in Tock, including those in the kernel, are mutually distrustful. Inside the kernel, Tock achieves this with a language-based isolation abstraction called capsules that incurs no memory or computation overhead. In user-space, Tock uses (more-or-less) a traditional process model where process are isolated from the kernel and each other using hardware protection mechanisms.

In addition, Tock is designed with other embedded systems-specific goals in mind. Tock favors overall reliability of the system and discourages components (prevents when possible) from blocking system progress when buggy. 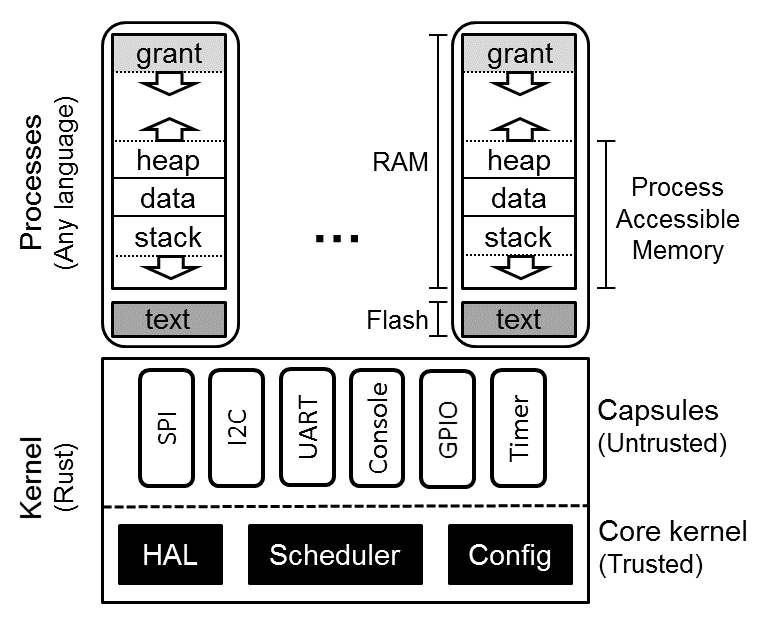 Tock includes three architectural components. A small trusted kernel, written in Rust, implements a hardware abstraction layer (HAL), scheduler and platform-specific configuration. Other system components are implemented in one of two protection mechanisms: capsules, which are compiled with the kernel and use Rust’s type and module systems for safety, and processes, which use the MPU for protection at runtime.

System components (an application, driver, virtualization layer, etc.) can be implemented in either a capsule or process, but each mechanism trades off concurrency and safety with memory consumption, performance, and granularity.

As a result, each is more appropriate for implementing different components. In general, drivers and virtualization layers are implemented as capsules, while applications and complex drivers using existing code/libraries, such as networking stacks, are implemented as processes.

A capsule is a Rust struct and associated functions. Capsules interact with each other directly, accessing exposed fields and calling functions in other capsules. Trusted platform configuration code initializes them, giving them access to any other capsules or kernel resources they need. Capsules can protect internal state by not exporting certain functions or fields.

Capsules run inside the kernel in privileged hardware mode, but Rust’s type and module systems protect the core kernel from buggy or malicious capsules. Because type and memory safety are enforced at compile-time, there is no overhead associated with safety, and capsules require minimal error checking. For example, a capsule never has to check the validity of a reference. If the reference exists, it points to valid memory of the right type. This allows extremely fine-grained isolation since there is virtually no overhead to splitting up components.

Rust’s language protection offers strong safety guarantees. Unless a capsule is able to subvert the Rust type system, it can only access resources explicitly granted to it, and only in ways permitted by the interfaces those resources expose. However, because capsules are cooperatively scheduled in the same single-threaded event loop as the kernel, they must be trusted for system liveness. If a capsule panics, or does not yield back to the event handler, the system can only recover by restarting.

Processes are independent applications that are isolated from the kernel and run with reduced privileges in separate execution threads from the kernel. The kernel schedules processes preemptively, so processes have stronger system liveness guarantees than capsules. Moreover, Tock uses hardware protection to enforce process isolation at runtime. This allows processes to be written in any language and to be safely loaded at runtime.

Processes are isolated from each other, the kernel, and the underlying hardware explicitly by the hardware Memory Protection Unit (MPU). The MPU limits which memory addresses a process can access. Accesses outside of a process’s permitted region result in a fault and trap to the kernel.

A process’s code, stored in flash, is made accessible with a read-only memory protection region while its memory is allocated as a contiguous region of RAM. One novel aspect of a Tock process is the presence of a “grant” region at the top of the address space. This is memory allocated to the process but covered by a memory protection region that the process can neither read nor write. The grant region allows the kernel to borrow memory from a process in response to system calls.

Capsules are not allowed to allocate memory dynamically since dynamic allocation in the kernel makes it hard to predict if memory will be exhausted. A single capsule with poor memory management could cause the rest of the kernel to fail. Moreover, since it uses a single stack, the kernel cannot easily recover from capsule failures.

For a capsule to safely allocate memory from a process, the kernel must enforce three properties:

Tock provides a safe memory allocation mechanism that meets these three requirements through memory grants. Capsules can allocate data of arbitrary type from the memory of processes that interact with them. This memory is allocated from the grant segment.

Just as with buffers passed through allow, references to granted memory are wrapped in a type-safe struct that ensures the process is still alive before dereferencing. Unlike shared buffers, which can only be a buffer type in a capsule, granted memory can be defined as any type. Therefore, processes cannot access this memory since doing so might violate type-safety.