Let’s walk through an example of Tock running a notorious embedded application: blink. The app simply toggles an LED every 500ms. The code for the application itself is pretty simple:

First we make sure the GPIO pin connected to the LED (which is connected to GPIO pin 0) is enabled as an output (line 4). Then, in an infinite loop, we toggle the LED and wait for 500ms.

Under the hood, the kernel initializes the chip, board and peripherals, protects most of the memory from the untrusted hands of the application, and sets up an asynchronous timer allowing it to go to sleep during the delay, transparently to the application. So let’s dive in and see how this all works.

We start by going through the steps required to run the first line of application code above. This involves initializing the chip (clocks, controllers, etc), setting up the board (specifically initializing high-level drivers and providing them with access to hardware resources) and process initialization.

The ARM Cortex-M boot sequence is fairly minimal, especially since the CPU can execute code directly from embedded flash. The CPU expects a vector table at the very beginning of flash (literally address 0). The vector table contains function pointers to handlers for the various hardware interrupts and an initial stack pointer value: 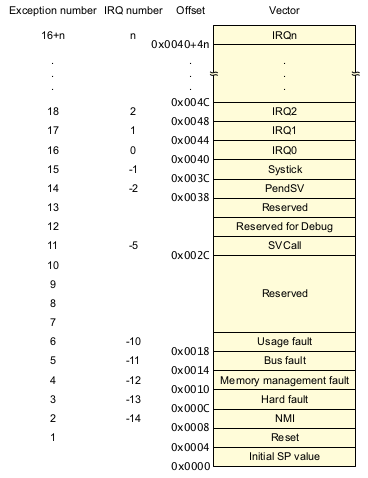 When the CPU powers on, it simply loads the first word into the stack pointer (SP) register, and the second word into the program counter (PC) register. From there we can run arbitrary C/Rust code.

In Tock, the chip-specific crate1 sets up the vector table by defining values in the .vectors2 section and relies on the board-specific crate3 to place that section appropriately using its linker script:

Since reset_handler is defined in the board-specific crate, that’s where we’ll start executing. However, the first thing it calls is the chip’s initialization function (e.g. sam4l::init()). Chip initialization copies the data section from flash to RAM, zeroes out the BSS section, and accounts for any chip errata.

Next, reset_handler chooses a clock source for the CPU and initializes controllers and drivers. This code starts to look more “Rusty”. Isolation units in the Tock kernel, including drivers and virtualization layers, are called capsules. The design document goes into more detail about capsules but, importantly for us, capsules often have circular dependencies on each other, and those are set up in the board initialization.

Since our application uses a hardware alarm controller to sleep between blinking the LED, let’s look specifically at how that stack is setup in the kernel. The full-stack includes a hardware alarm driver (for the SAM4L’s AST controller), a virtual alarm capsule (which virtualizes the alarm for use by multiple capsules in the kernel) and a TimerDriver that exposes a virtualized timer to applications through a system call interface:

The static_init! macro creates and initializes variables in static memory, while getting around some restrictions on static initialization in Rust (e.g. constructors have to be const functions).

Above, we’re initializing a new component for each level of the stack in static memory, passing it a reference to the component below and also setting it as the client of the same component. This works because all of the components implement both the time::Alarm and time::Client traits and because capsules use immutable references to self.

Finally, the TimerDriver is stored in the board’s struct, which is passed to the kernel’s main function (the scheduler):

We also passed the result of load_processes() to kernel::main. This is a board-specific function that reads process headers from flash, populates a list of structures to represent them, and initializes each of their data segments, global offset tables and stacks into memory.

kernel::main is the scheduler for Tock. It runs in a loop, where each iteration invokes events on capsules in response to hardware interrupts that have occurred, runs any processes that are either in the running state or have pending callbacks, and servicing systems calls from process by, again, invoking events on the appropriate capsules.

Capsules invoked in response to either hardware interrupts (e.g. a hardware timer firing) or system calls.

The chip definition determines which capsules to call in response to interrupts in the service_pending_interrupts method4:

The board definition specifies which system call number is associated with a particular capsule in the with_driver method5:

Capsules that service system calls must conform to the Driver trait, which requires them to implement three methods (allow, command, and subscribe) corresponding to three of the five system calls processes can invoke. The other two (memop and yield) are handled directly by the scheduler.

Processes in Tock run using a callback-based event system. Processes can request to be notified of certain events by drivers by passing a callback functions to driver through subscribe system calls. The process must later invoke the yield system call to tell the scheduler to schedule its next pending callback or block the process until one is available.

A callback is just an instruction address in the process and three arguments (passed via registers). When a process is first created, the kernel enqueues a default start callback pointing to the processes _start function which, by default, is defined in the libtock user library that the process links to statically, and simply sets up a stack and calls main.

So, in the case of our blink app, once the chip and board are initialized and our blink process is loaded, the first thing the scheduler does is invoke the start callback.

The app is composed of calls to three library functions: gpio_enable_output, gpio_toggle and delay_ms. The first two are just wrappers around the command system call, which ask the GPIO driver to perform quick, synchronous operations.

delay_ms, on the other hand, is more complex and involves four of the five system calls. Let’s follow delay_ms end-to-end to get a picture of the interaction between processes, capsules, and the hardware.

Note: timer_subscribe and timer_oneshot are simple wrappers around subscribe and command. The code above shows the exact calls made in comments.

Subscribe takes a driver number, sub-driver number, a callback function pointers and an arbitrary user-data value to pass back to the callback as the last parameter.

Because Callback is opaque, the timer driver cannot access the function pointer or user-data directly, protecting the process from a buggy or malicious driver switching into arbitrary code in the process or corrupting (or leaking) the user-data value.

In the case of the timer driver, subscribe stores the Callback for later in a process-specific data structure6:

Command takes a driver number, sub-driver number and an integer argument. In the case of timer_oneshot, the argument specifies in how many milliseconds in the future the timer should go off.

Similar to subscribe, when a process calls command, a system call instruction is invoked, trapping to the scheduler, which figures out which driver to forward the command to by looking up the driver number.

The scheduler then simply calls the driver’s command method with the sub-driver number, argument and the process identifier. The timer driver’s oneshot command stores both the current absolute time and the interval in the process-specific data structure. If the underlying alarm is already armed it checks if it needs to reset which is the next time in needs to fire (since this interval might come sooner than those set previously by other processes). Alternatively, it simply arms the alarm to fire when the interval expires.

Finally, yield tells the scheduler to block the process until a callback is ready to run. When that happens, the scheduler switches to the process and jumps to the callback’s function pointer, passing the user-data captured by the subscribe call as well as arguments from the driver. The callback runs in a new stack frame in the process, as though yield had called it directly. When it returns, it returns to the point where yield was called.

This allows us to write the yield_for function, which continues to yield until a particular callback has completed:

Closing the loop with the hardware

At this point, the timer driver has set up a hardware timer to fire in 500 milliseconds and the blink app is blocked waiting for a callback to come in from the timer driver. Until there is a hardware event (i.e. the alarm firing), there is nothing for the system to do, so the scheduler puts the CPU to sleep at the end of the event loop iteration.

When the alarm fires, the CPU is woken back up and the scheduler continues where it left off. First, it calls service_pending_interrupts which asks the chip crate to check which hardware interrupt occured (in this case the ASTALARM). Recall that for the SAM4L, that method looks something like this:

The chip sees that the alarm has fired and calls the ast’s handle_interrupt method (AST stands for “Asynchronous Timer” and is the name of the SAM4L’s alarm controller).

This method passes marks the interrupt handled and passes the event up to it’s client (the one we set up in the board initialization) through the time::Client trait’s fired method.

In our case, the direct client is a virtualization layer that allows multiple capsules to share the same hardware alarm. That, in turn, uses the same trait to call our timer driver.

The timer driver’s time::Client#fired method looks through the process specific data structures to see which process’s timers have expired—we know that there is as least one, but there may be more than one.

The timer driver then schedules each process’s Callback by calling it’s schedule method, which enqueues the Callback in the process’s callback queue (part of the process data structure created in load_processes).

In our case, this function is the blink app’s delay_cb, which simply sets the condition variable yield_for is waiting on. yield for can return, and thus delay_ms returns. And we’re done!